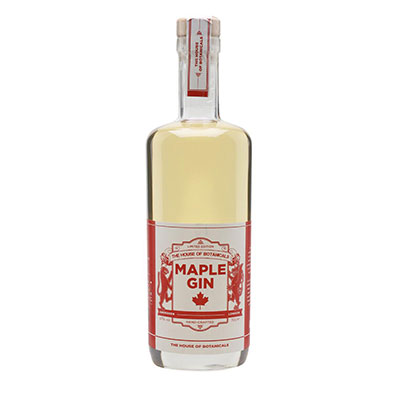 HOUSE OF THE BOTANICALS MAPLE GIN

Launched at the Aberdeen Gin Fest in July 2018, the House of Botanicals Maple Gin was originally discovered in old newspaper archives whilst bartending back in 2010, with our variant created during the Research & Development stage of our Old Tom Gin introducing a floral and spicy edge to accompany the dominant juniper flavour. It has initially been released as a limited edition batch of 1000 bottles and continues our exploration of flavours from around the globe.

Though new to the present marketplace and with our recipe adapted to suit modern tastes, the history of Maple Gin goes back over 100 years, originally being manufactured by the Buffalo Distilling Company of New York between 1893 and 1918, before the distillery succumbed to the influence of the Temperance Movement and the devastation of Prohibition, taking with it this unique style of gin. The Buffalo Distillery recently reopened in March of 2017, now producing bourbon, apple brandy and vodka.

​For our House of Botanicals Maple Gin we use the same base as with our Old Tom Gin. This is distilled in London with juniper berries, angelica root, orris root, coriander seed, cassia bark, almond, orange peel and lemon peel, before being shipped to the House of Botanicals in Aberdeen where we add saffron, chamomile flowers and spicy ginger root post distillation, before flavouring further and lightly sweetening with maple syrup. The Maple Gin is bottled at 47% abv.

The Coat of Arms branding found on our Old Tom Gin is still present, with the Panther and Dragon still in place to symbolise the Aberdeen and London Coat of Arms, though we have adapted the design to incorporate the Canadian Flag, a Maple Leaf, and the colour red which is synonymous with our hometown.

Any cookies that may not be particularly necessary for the website to function and is used specifically to collect user personal data via analytics, ads, other embedded contents are termed as non-necessary cookies. It is mandatory to procure user consent prior to running these cookies on your website.